Collapsing long mail quotes in pure CSS and other new features in Trojita 0.3.92

There's a lot of people who are very careful to never delete a single line from an e-mail they are replying to, always quoting the complete history. There's also a lot of people who believe that it wastes time to eyeball such long, useless texts. One of the fancy features introduced in this release of Trojitá, a fast Qt IMAP e-mail client, is automatic quote collapsing. I won't show you an example of an annoying mail for obvious reasons :), but this feature is useful even for e-mails which employ reasonable quoting strategy. It looks like this in the action:

When you click on the ... symbols, the first level expands to reveal the following: 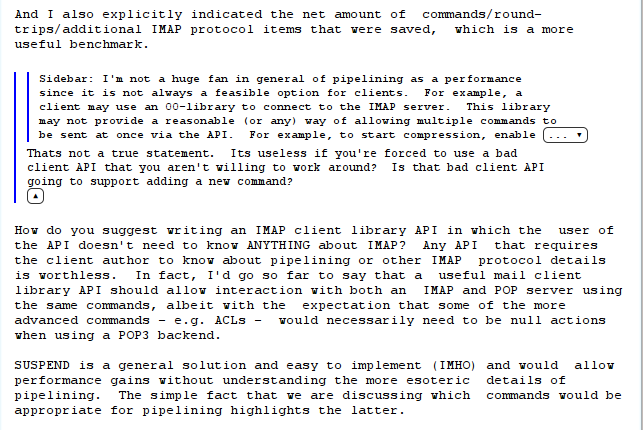 When everything is expanded, the end results looks like this: 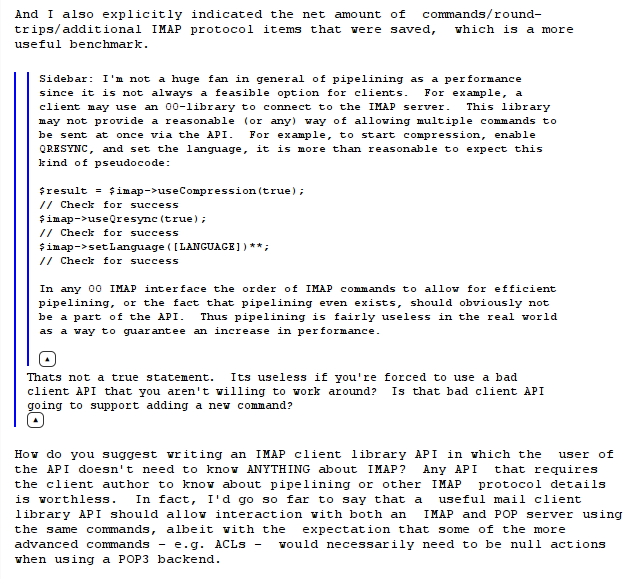 This concept is extremely effective especially when communicating with a top-posting community.

We had quite some internal discussion about how to implement this feature. For those not familiar with Trojitá's architecture, we use a properly restricted QtWebKit instance for e-mail rendering. The restrictions which are active include click-wrapped loading of remote content for privacy (so that a spammer cannot know whether you have read their message), no plugins, no HTML5 local storage, and also no JavaScript. With JavaScript, it would be easy to do nice, click-controlled interactive collapsing of nested citations. However, enabling JavaScript might have quite some security implications (or maybe "only" keeping your CPU busy and draining your battery by a malicious third party). We could have enabled JavaScript for plaintext contents only, but that would not be as elegant as the solution we chose in the end.

Starting with Qt 4.8, WebKit ships with support for the :checked CSS3 pseudoclass. Using this feature, it's possible to change the style based on whether an HTML checkbox is checked or not . In theory, that's everything one might possibly need, but there's a small catch -- the usual way of showing/hiding contents based on a state of a checkbox hits a WebKit bug (quick summary: it's tough to have it working without the ~ adjacent-sibling selector unless you use it in one particular way). Long story short, I now know more about CSS3 than I thought I would ever want to know, and it works (unless you're on Qt5 already where it assert-fails and crashes the WebKit).

Speaking of WebKit, the way we use it in Trojitá is a bit unusual. The QWebView class contains full support for scrolling, so it is not necessary to put it inside a QScrollArea. However, when working with e-mails, one has to account for messages containing multiple body parts which have to be shown separately (again, for both practical and security reasons). In addition, the e-mail header which is typically implemented as a custom QWidget for flexibility, is usually intended to combine with the message bodies into a single entity to be scrolled together. With WebKit, this is doable (after some size hints magic, and I really mean magic -- thanks to Thomas Lübking of the KWin fame for patches), but there's a catch -- internal methods like the findText which normally scroll the contents of the web page into the matching place no longer works when the whole web view is embedded into a QScrollArea. I've dived into the source code of WebKit and the interesting thing is that there is code for exactly this case, but it is only implemented in Apple's version of WebKit. The source code even says that Apple needed this for its own Mail.app -- an interesting coincidence, I guess.

Compared with the last release, Trojitá has also gained support for "smart replying". It will now detect that a message comes from a mailing list and Ctrl+R will by default reply to list. Thomas has added support for saving drafts, so that you are not supposed to lose your work when you accidentally kill Trojitá anymore. There's also been the traditional round of bug fixes and compatibility improvements. It is entertaining to see that Trojitá is apparently triggering certain code paths in various IMAP server implementations, proprietary and free software alike, for the first time.

The work on support for multiple IMAP accounts is getting closer to being ready for prime time. It isn't present in the current release, though -- the GUI integration in particular needs some polishing before it hits the masses.

I'm happy to observe that Trojitá is getting features which are missing from other popular e-mail clients. I'm especially fond of my pet contribution, the quote collapsing. Does your favorite e-mail application offer a similar feature?

In the coming weeks, I'd like to focus on getting the multiaccounts branch merged into master, adding better integration with the address book (Trojitá can already offer tab completion with data coming from Mutt's abook) and general GUI improvements. It would also be great to make it possible to let Trojitá act as a handler for the mailto: URLs so that it gets invoked when you click on an e-mail address in your favorite web browser, for example.

And finally, to maybe lure a reader or two into trying Trojitá, here's a short quote from a happy user who came to our IRC channel a few days ago:

One cannot help but be happy when reading this. Thanks!

If you're on Linux, you can get the latest version of Trojitá from the OBS or the usual place.

Got a comment? Feel free to mail them to me!
Tags: gentoo, kde, qt, trojita.