Are you interested in cryptography, either as a user or as a developer? Read on -- this blogpost talks about some of the UI choices we made, as well as about the technical challenges of working with the existing crypto libraries.

The next version of Trojitá, a fast e-mail client, will support working with encrypted and signed messages. Thanks to Stephan Platz for implementing this during the Google Summer of Code project. If you are impatient, just install the trojita-nightly package and check it out today.

Here's how a signed message looks like in a typical scenario: 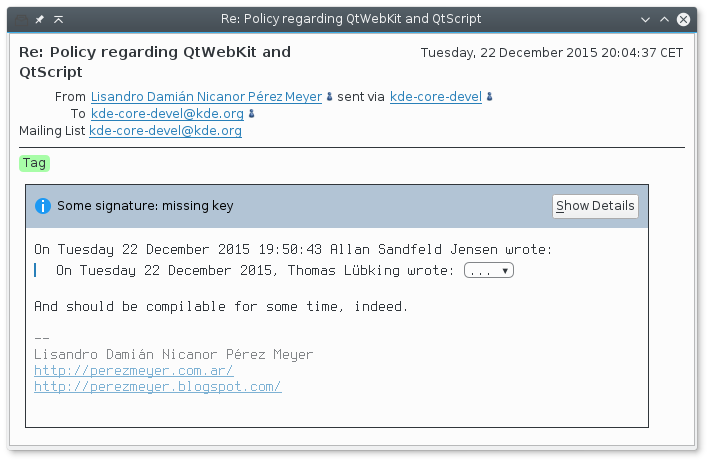 Some other e-mail clients show a yellow semi-warning icon when showing a message with an unknown or unrecognized key. In my opinion, that isn't a great design choice. If I as an attacker wanted to get rid of the warning, I could just as well sign a faked but unsigned e-mail message. This message is signed by something, so we should probably not make this situation appear less secure than as if the e-mail was not signed at all.

(Careful readers might start thinking about maintaining a peristant key association database based on the observed traffic patterns. We are aware of the upstream initiative within the GnuPG project, especially the TOFU, Trust On First Use, trust model. It is a pretty fresh code not available in major distributions yet, but it's definitely something to watch and evaluate in future.)

Key management, assigning trust etc. is something which is outside of scope for an e-mail client like Trojitá. We might add some buttons for key retrieval and launching a key management application of your choice, such as Kleopatra, but we are definitely not in the business of "real" key management, cross-signatures, defining trust, etc. What we do instead is working with your system's configuration and showing the results based on whether GnuPG thinks that you trust this signature. That's when we are happy to show a nice green padlock to you: 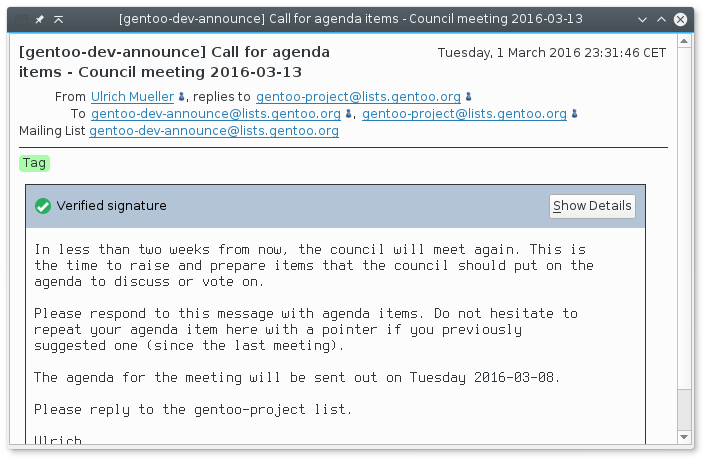 We are also making a bunch of sanity checks when it comes to signatures. For example, it is important to verify that the sender of an e-mail which you are reading has an e-mail which matches the identity of the key holder -- in other words, is the guy who sent the e-mail and the one who made the signature the same person?

If not, it would be possible for your co-worker (who you already trust) to write an e-mail message to you with a faked From header pretending to be your boss. The body of a message is signed by your colleague with his valid key, so if you forget to check the e-mail addresses, you are screwed -- and that's why Trojitá handles this for you: 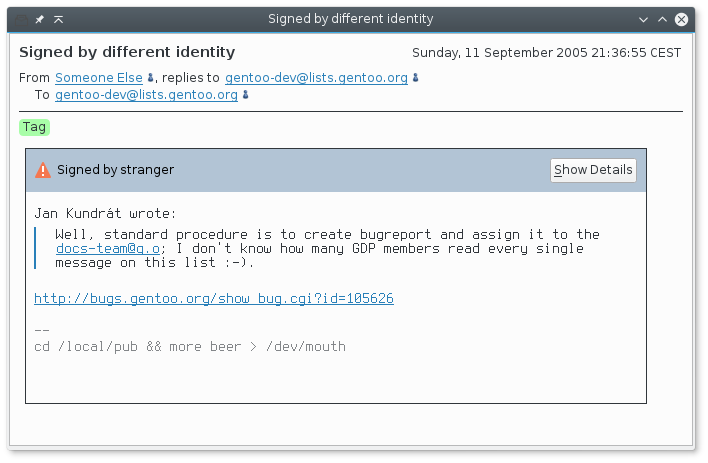 In some environments, S/MIME signatures using traditional X.509 certificates are more common than the OpenPGP (aka PGP, aka GPG). Trojitá supports them all just as easily. Here is what happens when we are curious and decide to drill down to details about the certificate chain: 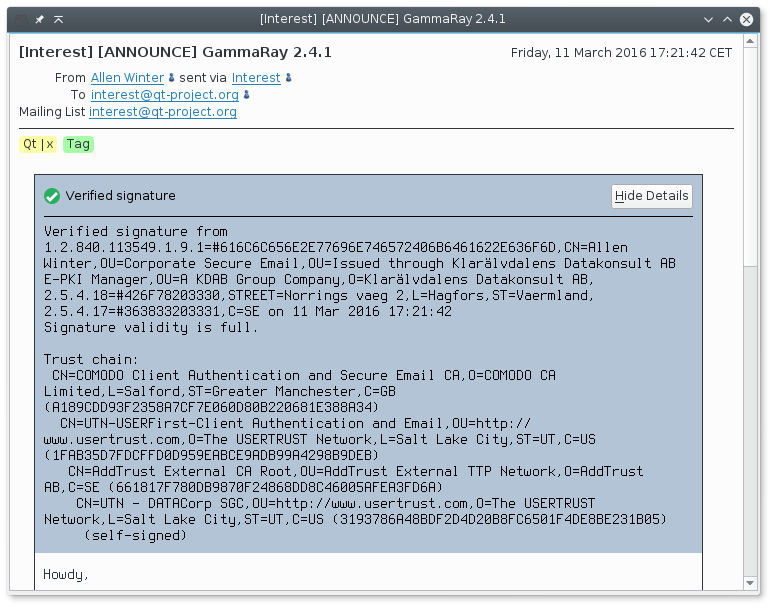 Encrypted messages are of course supported, too: 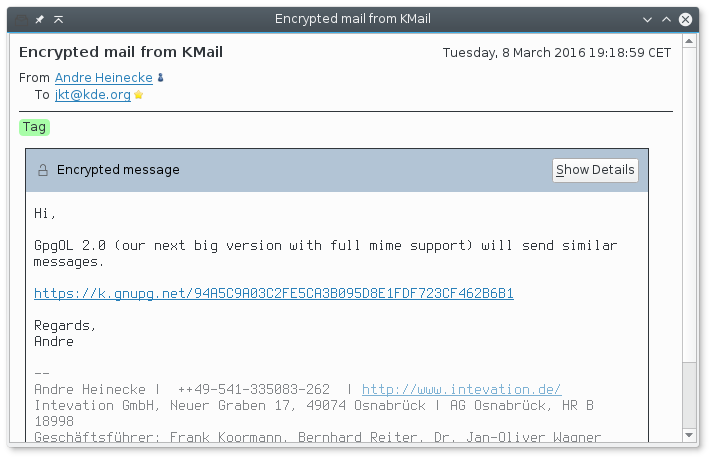 We had to start somewhere, so right now, Trojitá supports only read-only operations such as signature verification and decrypting of messages. It is not yet possible to sign and encrypt new messages; that's something which will be implemented in near future (and patches are welcome for sure).

Originally, we were planning to use the QCA2 library because it provides a stand-alone Qt wrapper over a pluggable set of cryptography backends. The API interface was very convenient for a Qt application such as Trojitá, with native support for Qt's signals/slots and asynchronous operation implemented in a background thread. However, it turned out that its support for GnuPG, a free-software implementation of the OpenPGP protocol, leaves much to be desired. It does not really support the concept of PGP's Web of Trust, and therefore it doesn't report back how trustworthy the sender is. This means that there woldn't be any green padlock with QCA. The library was also really slow during certain operations -- including retrieval of a single key from a keystore. It just isn't acceptable to wait 16 seconds when verifying a signature, so we had to go looking for something else.

Compared to the QCA, the GpgME++ library lives on a lower level. Its Qt integration is limited to working with QByteArray classes as buffers for gpgme's operation. There is some support for integrating with Qt's event loop, but we were warned not to use it because it's apparently deprecated code which will be removed soon.

The gpgme library supports some level of asynchronous operation, but it is a bit limited. Ultimately, someone has to do the work and consume the CPU cycles for all the crypto operations and/or at least communication to the GPG Agent in the background. These operations can take a substantial amount of time, so we cannot do that in the GUI thread (unless we wanted to reuse that discouraged event loop integration). We could use the asynchronous operations along with a call to gpgme_wait in a single background thread, but that would require maintaining our own dedicated crypto thread and coming up with a way to dispatch the results of each operation to the original requester. That is certainly doable, but in the end, it was a bit more straightforward to look into the C++11's toolset, and reuse the std::async infrastructure for launching background tasks along with a std::future for synchronization. You can take a look at the resulting code in the src/Cryptography/GpgMe++.cpp. Who can dislike lines like task.wait_for(std::chrono::duration_values? :)

Finally, let me provide credit where credit is due. Stephan Platz worked on this feature during his GSoC term, and he implemented the core infrastructure around which the whole feature is built. That was the crucial point and his initial design has survived into the current implementation despite the fact that the crypto backend has changed and a lot of code was refactored.

Another big thank you goes to the GnuPG and GpgME developers who provide a nice library which works not just with OpenPGP, but also with the traditional X.509 (S/MIME) certificates. The same has to be said about the developers behind the GpgME++ library which is a C++ wrapper around GpgME with roots in the KDEPIM software stack, and also something which will one day probably move to GpgME proper. The KDE ties are still visible, and Andre Heinecke was kind enough to review our implementation for obvious screwups in how we use it. Thanks!

Got a comment? Feel free to mail them to me!
Tags: gentoo, kde, qt, trojita.